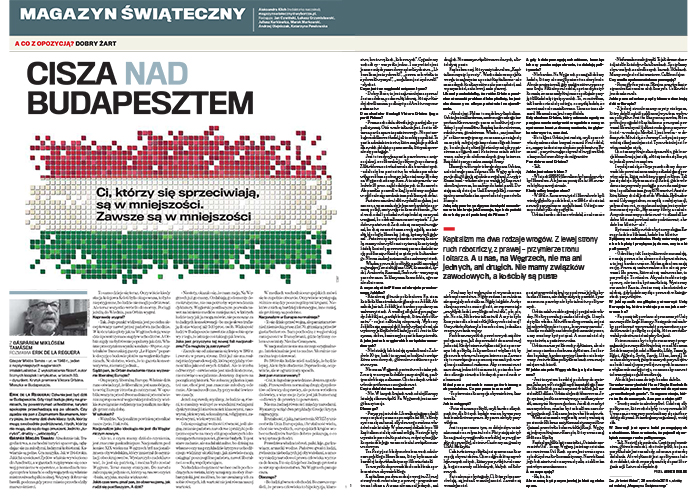 This Saturday, photographer Estrella de la Reguera’s and my interview with the Hungarian philosopher Gáspar Miklós Tamás (sometimes referred to as TGM) was translated to Polish and published in the country’s leading newspaper, Gazeta Wyborcza (original in English here). That same day, thousands of Poles went out on the streets and demonstrated against the controversial new laws that’ve been introduced by the nationalist government.

This new legislation puts more power into the hands of the ruling Law and Justice party (PiS), undercutting the independence of the Constitutional Court and public media companies. Several leading figures in public media have already been fired after having refused to fall into line, and many Poles are quite justifiably concerned about the press freedom in their country.

Yesterday the EU decided to launch an unprecedented inquiry in response to the new legislation. In theory, that opens the possibility of sanctions against Poland, (for example in the form of a suspension of Poland’s voting rights). In practice, though, any such measures are likely to be blocked by Hungary, a country that’s been the bastion of radical nationalism in the EU for quite some time now.

It is against this backdrop that the interview with Gáspar Miklós Tamás was reprinted in Gazeta Wyborcza. There is a real concern in the country that Poland will move in a “Hungarian” direction, and in the interview the philosopher doesn’t hesitate to call today’s Hungary a “post-fascist” regime:

“It has all the democratic trappings, there is no need for a formal dictatorship. We have a minority media world, where people as myself can talk with no consequence for them – because it doesn’t reach more than 5 to 10 percent of the population.”

The headline in the Polish paper says it all: Cisza nad Budapesztem (“Silence over Budapest“). Don’t miss the original version in English at Arbetet Global. A slightly shortened version is also included in the new and updated paperback version of my book Gränsbrytarna (“Border Breakers”).

This site uses Akismet to reduce spam. Learn how your comment data is processed.