Border Breakers – Global migration and the rise of Trump-like nationalism

Why do children drown in the Mediterranean?

How come more than 10,000 migrants are kidnapped every year in Mexico?

What ever happened to the idea of freedom of movement?

In this fast-paced work of non-fiction, journalist Erik de la Reguera searches for the answers to these questions. He joins three undocumented migrants on their perilous journeys through different parts of the world. Thirty-eight-year-old Norma leaves behind her five children in Guatemala to ride ‘the Death Train’ through Mexico, eventually facing the difficult challenge of getting past the US Border Patrol. Twenty-two-year-old Jamal sets off on a journey from his native Afghanistan – hiding in bus engines, crossing snow-capped mountains, and suffering severe police brutality. When he finally reaches crisis-ridden Greece, and, later on, Brussels, the heart of the EU, he is shocked at how he and hundreds of other homeless migrants are treated. A similar scenario meets twenty-three-year-old Abou from Côte d’Ivoire on his arrival in Sicily. 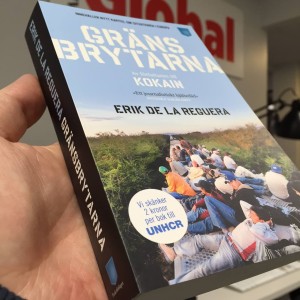 Interlaced with the tales of these undocumented migrants on the road is a story of 150,000 years of human migration, and of the growing ambition of states and private firms to control that mobility. The resurgence of ultranationalist movements is described and analyzed, as is the complex and increasingly unequal relationship between the mobility of capital and that of individuals.

Throughout the book, particular emphasis is laid on a quest that is both philosophical and practical: the search for human rights, porous borders, a renewed sense of citizenship and cosmopolitan ideals in a globalized world. Finally, the book is conceived as a contribution to the debate on a reformed global institutional framework, in which freedom of movement and increased global migration could have key parts to play as generators of development, equality and radical, cosmopolitan ideals.

“It is an incredibly good reportage. That said, what I appreciate even more is Erik de la Reguera’s ambition  to set the various components of the reportage in a broader context.”
(Expressen)

“De la Reguera’s book is in a class of its own among everything written about borders and migrants today – the highest one.” (Dagens Nyheter)

ERIK DE LA REGUERA (1975- ) is an award-winning writer and journalist based in Sweden. For almost a decade he was the Latin America correspondent for Sweden’s biggest circulation quality newspaper, Dagens Nyheter. Today he is a well-known reporter in his country, currently working as a foreign news reporter at the newspaper Arbetet. His first book, Kokain (2010), written with Lasse Wierup, sold over 50,000 copies in Sweden. His second book Gränsbrytarna has received glowing reviews in the Swedish media.

Read the first chapter of the book in US English here.

Read the first chapter of the book in UK English here.

Interview with Hungarian philosopher Gaspar Miklos Tamas, that is partially reprinted in the last chapter.